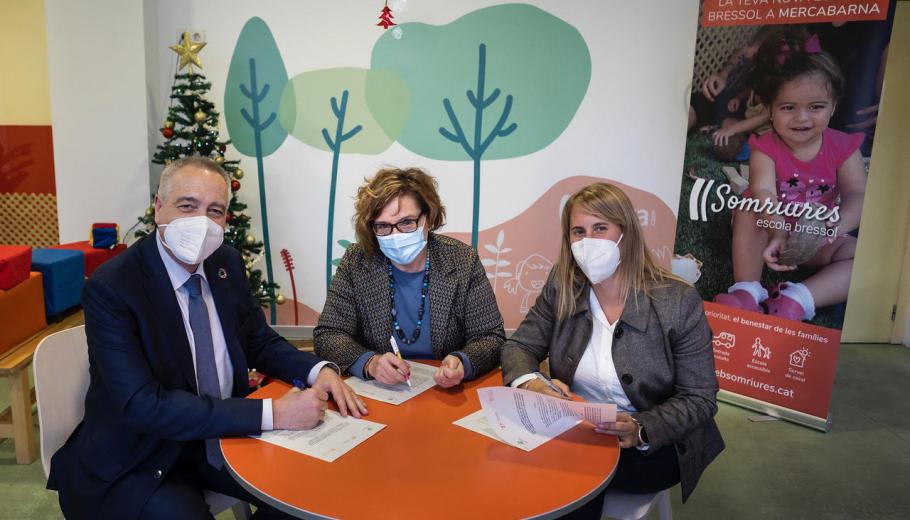 The Zona Franca Consortium in Barcelona (CZFB) has signed an agreement with Mercabarna and Suara Cooperativa for the use of the Somriures nursery school -located on the Mercabarna site-, making it available to workers in all companies installed in the Zona Franca industrial estate. In this way, the workers of the industrial estate will be able to register their sons and daughters and use the services of the nursery school without having to pay to access the Mercabarna site.

Suara Cooperativa launched the Somriures nursery school, the first to open with private management, last September. The site has a large facility of 630 square meters on one floor and a large outdoor patio. This school has been created to attend to and accompany in their development children aged between 4 months and 3 years, and to promote the conciliation of the work and family responsibilities of the people who work in this productive area and logistics of the city of Barcelona.

Pere Navarro, Special State Delegate to the Zona Franca Consortium in Barcelona (CZFB), Montserrat Ballarín, President of Mercabarna and Councilor for Trade and Markets, and Laura Gómez, Customer Area Manager and representative of Suara Cooperativa, were present at the signing ceremony, which took place at the Somriures school itself.

Pere Navarro emphasized that "with this agreement we take a step further in advancing the conciliation between work and family life for the workers of the CZFB and the companies of the industrial estate of the Zona Franca, expanding the services we offer to companies of this productive and logistical area of ​​Barcelona".

Montserrat Ballarín, for her part, explained that "since Mercabarna built the nursery school in 2004, with the aim of facilitating the family logistics of the 7,500 workers in the food estate, we have always collaborated with its managers to offer a very high quality education and services adapted to the needs of the different sectors of this large market". "That's why," he said, "we are very pleased to be able to share all this with the rest of the workers in the Free Trade Zone."

Finally, the Customer Area Manager in Suara Laura Gómez, was very pleased because "it is in Suara's DNA to respond to the needs of people with value-added services. What better way than to have your own son or daughter a few minutes from work in an educational project in which he learns through play, observation and experimentation, prioritizing education from values ​​for a positive development of his own identity".

Més Espais is born: an instrument to finance facilities with a social and environmental impact